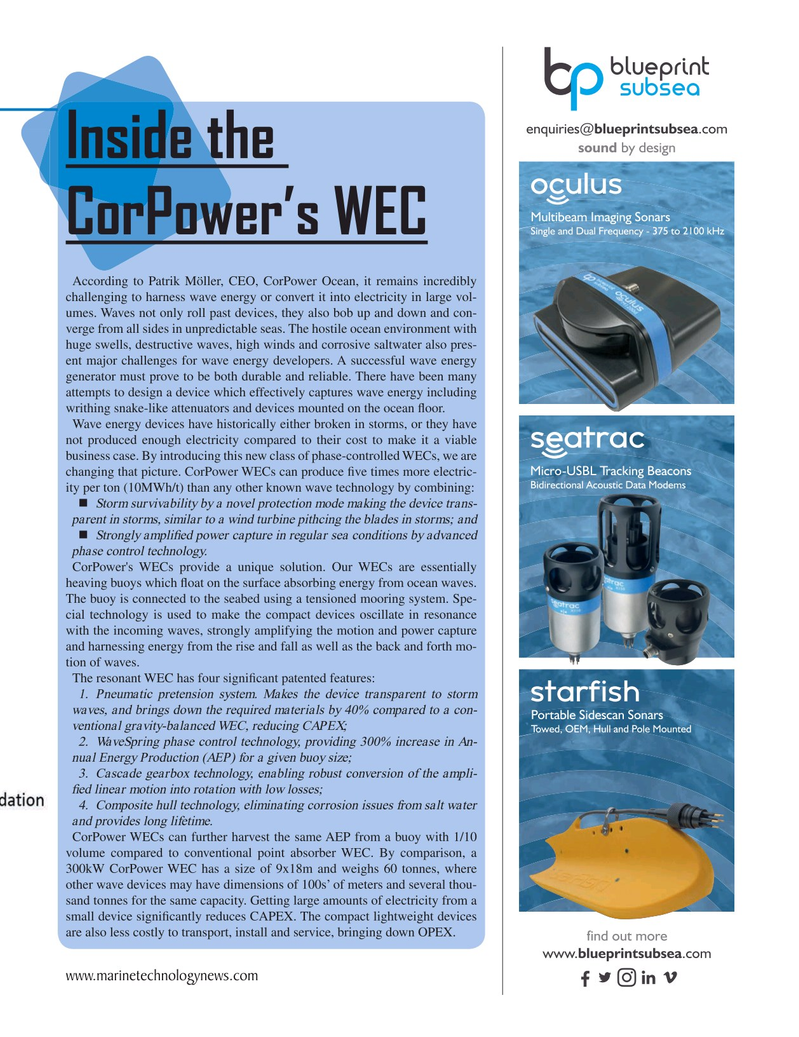 According to Patrik Möller, CEO, CorPower Ocean, it remains incredibly challenging to harness wave energy or convert it into electricity in large vol- umes. Waves not only roll past devices, they also bob up and down and con- verge from all sides in unpredictable seas. The hostile ocean environment with huge swells, destructive waves, high winds and corrosive saltwater also pres- ent major challenges for wave energy developers. A successful wave energy generator must prove to be both durable and reliable. There have been many attempts to design a device which effectively captures wave energy including writhing snake-like attenuators and devices mounted on the ocean ? oor.

Wave energy devices have historically either broken in storms, or they have not produced enough electricity compared to their cost to make it a viable business case. By introducing this new class of phase-controlled WECs, we are changing that picture. CorPower WECs can produce ? ve times more electric- 0LFUR86%/7UDFNLQJ%HDFRQV %LGLUHFWLRQDO$FRXVWLF'DWD0RGHPV ity per ton (10MWh/t) than any other known wave technology by combining: ?Storm survivability by a novel protection mode making the device trans- parent in storms, similar to a wind turbine pithcing the blades in storms; and ?Strongly ampli? ed power capture in regular sea conditions by advanced phase control technology.

CorPower's WECs provide a unique solution. Our WECs are essentially heaving buoys which ? oat on the surface absorbing energy from ocean waves.

The buoy is connected to the seabed using a tensioned mooring system. Spe- cial technology is used to make the compact devices oscillate in resonance with the incoming waves, strongly amplifying the motion and power capture and harnessing energy from the rise and fall as well as the back and forth mo- tion of waves.

CorPower WECs can further harvest the same AEP from a buoy with 1/10 volume compared to conventional point absorber WEC. By comparison, a 300kW CorPower WEC has a size of 9x18m and weighs 60 tonnes, where other wave devices may have dimensions of 100s’ of meters and several thou- sand tonnes for the same capacity. Getting large amounts of electricity from a small device signi? cantly reduces CAPEX. The compact lightweight devices are also less costly to transport, install and service, bringing down OPEX.