Harnessing the power of the tides is not for the squeamish, with the roster of trials and failures long and distinguished. Jason Hayman and his Sustainable Marine Energy crew are putting their tech to the test in one of the harshest spots on the planet, the Bay of Fundy, as his discussed with Marine Technology TV.

Jason, to start, how did you come to a career in the offshore renewable energy field?

I suppose my interest got piqued back in about 2003. I went to a lecture at the University of Newcastle and they had a wave energy crowd there and a tidal energy developer. It was pretty cool tech, and at the time I was working on a FPSO topside installation in a shipyard in Newcastle. So I was working for “the dark side” and I had my eyes opened. I think I had a moment where I thought this is where the next 30 years is going to be, which is figuring out how to (extract energy from the marine environment) renewably.

We understand that your company has developed a platform for floating tidal energy. Can you give us a brief on the technology and specifically how does it work, and is it scalable?

Our technology is basically a trimaran. It's on a big swinging mooring and it's got some outboards off the back, outboards not propelling it forward, instead basically the hydro generators, which are capturing the energy in the flow going past the platform. So the loads are fairly big and the thing is pretty beamy because those turbines are fairly large.

We've settled on a drivetrain, which is about 70 kW, but we can scale the rotor diameter to the turbines, depending on the site characteristics. Whether it's a moderate resource, like six, seven knots, or a fierce site like FORCE, which is more like 10 knots. And then can vary the number of turbines that we put on the platform: we can do two, four or six at the moment. That means we can get anywhere from 70 to 420 kW at one platform.

What do you consider to be the key technical points of your system?

The first project I was involved in with Voith Hydro out in Korea, installing a first-generation gravity-mounted turbine, was a fantastic project. But the heavy lift gear and everything that was needed to put it on the seabed was huge and expensive. And if you just had something go wrong, one little component on the auxiliary system failure, you'd have to lift this whole system up with hundreds of tons to be able to do it.
That's what drove us towards thinking about a floating system, and in developing a floating system, the real challenge is dealing with the huge loads through the mooring system.

To give you an idea, two of our turbines produce the same thrust as an F-35 fighter jet on full afterburner. You take our new six-turbine platform, and that's like taking three F-35s, telling the pilots hit full throttle, and putting that on a leash. We had to really think about it literally from the bottom up, and we developed an innovative rock anchoring system where we lower a remotely-operated tool onto the seabed, we drill and install a rock anchor in one hit. And we've got to do that within an hour, deck to deck, because we've got to do it at slack tide. That's really challenging.

Then we've got to think about the mooring side of it, which it's not just a simple chain, all one size all the way up, because we've got to think about how the different parts of the mooring system work. Why … because we've also got to deal with rise and falls of the tide of up to 15 meters at FORCE. And then we've got a mooring turret, it's on the platform itself, which is what we connect the mooring into. That's got to allow the power export cable to come up through the center of it, through the geostationary portion, and then it's got to react all that thrust that's coming through the structure. 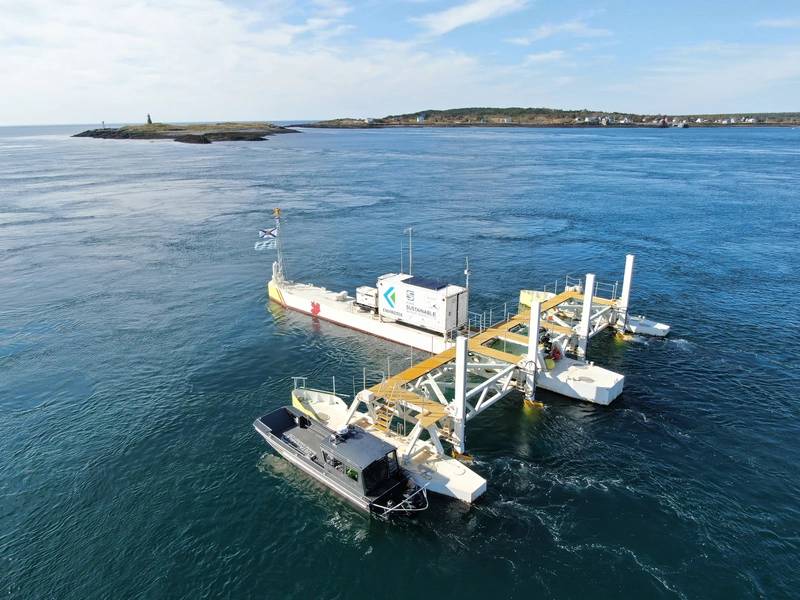 Well, it sounds like there's a lot going on there for sure. Jason, we understand that the system has been put to the test in the field. Can you give us some specifics on that? And also, can you discuss the activities that you have planned for this year in the Bay of Fundy?

The first test deployment was on the west coast of Scotland from the winter of 2017 through to the summer 2018. And then we pulled it out and took it over to Canada, to Grande Passage, in the mouth of the Bay of Fundy, and that's where we've been testing it since we installed it there in September 2018. We’ve had some brief ins and outs to fix things, but we've had a pretty steady run for a bit more than a year there.

Then we have our next generation platform, which is going to be going into our first commercial project at FORCE and is literally sitting on the slipway at A.F. Theriault (at the time of the interview in February 2021). Then in the summer we'll be commencing the installation of all of our balance of plants. That's all the cabling, anchors and moorings. That first platform will be followed, hopefully, by two more by the end of the year.

Among you strategic partners, can you discuss your relationship with Schottel Hydro?

Schottel has been in the marine sector for a long, long time with its propulsion units. About 10 years ago now, they started an initiative to start to (leverage their know-how from the propulsion units) and turn that into a tidal turbine. They have done some work for other tidal turbine technology developers, supplying drivetrain components and subsystems. And in the meantime, they’ve been developing this small drivetrain themselves. We were partnering with them for a while using their drivetrain in our early prototypes, then we reached a point where we said, "Okay, well, you guys have got part of the system, we've got part of the solution. And ultimately all people want is one package." So we teamed with them, and they’ve actually now become the largest shareholder in our business.

Excellent. So how are you investing in the coming 12 to 24 months?

The main investment that we're making this year is in the team and the infrastructure required to deliver our first 9-MW commercial project at FORCE, which we're going to be delivering here in phases over the next three to four years. So this is about ramping it up; this is about moving from R&D and prototyping into commercial delivery mode. And that, of course, requires some pretty substantial investments in equipment. We just bought a couple of small support vessels. We're developing a new rig for anchoring at FORCE because it's a pretty brutal environment.

What do you see as the key hurdles to bring tidal power to utility scale?

I think first is the public acceptance, the social license, especially within the Bay of Fundy. Hopefully we can bring long-lasting economic benefit back to that area. It's not like what's happening in the North Sea, where the (oil and gas) resources are going to one day run out and then the industry is going to wind down and people are going to be looking for jobs. I think people have got to understand it's a long-term play, but it's hard yards to get there. It's going to require support and once you start deploying at scale, costs are going to come down. We've seen that with offshore wind. But you've got to get to deployment at scale and make it meaningful. 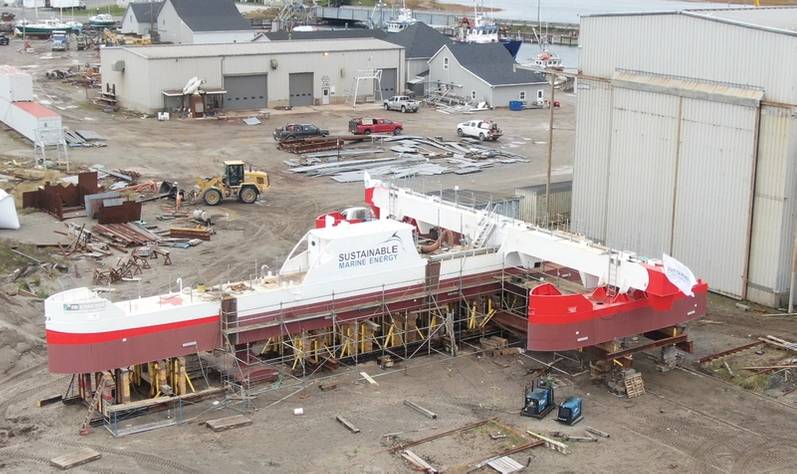 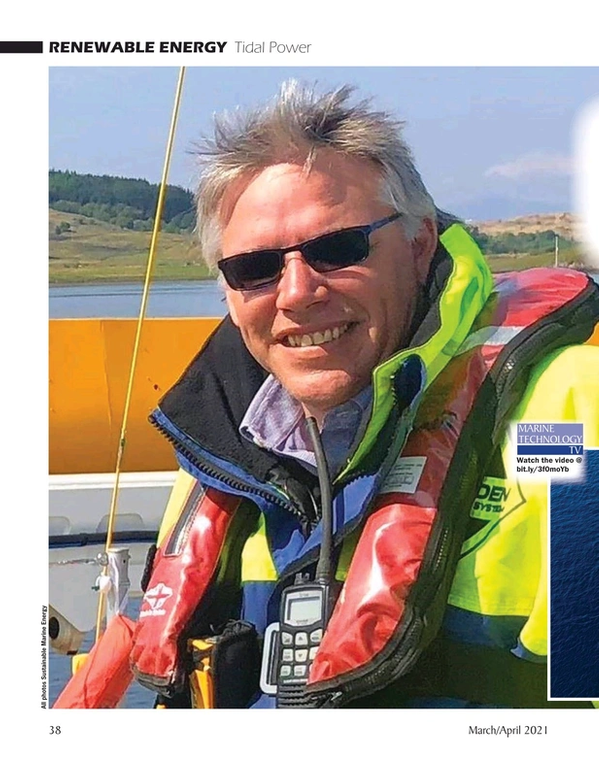 Other stories from March 2021 issue