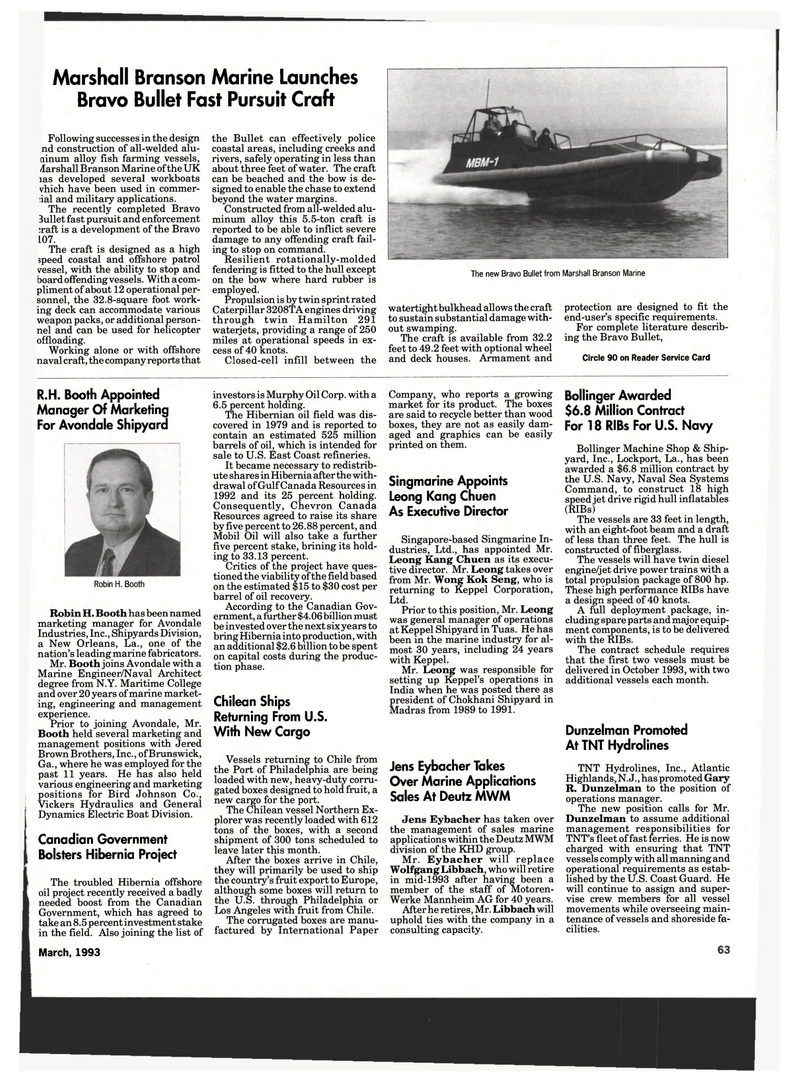 Bullet fast pursuit and enforcement iraft is a development of the Bravo 107.

The craft is designed as a high speed coastal and offshore patrol vessel, with the ability to stop and board offending vessels. With a com- pliment of about 12 operational per- sonnel, the 32.8-square foot work- ing deck can accommodate various weapon packs, or additional person- nel and can be used for helicopter offloading.

Working alone or with offshore naval craft, the company reports that the Bullet can effectively police coastal areas, including creeks and rivers, safely operating in less than about three feet of water. The craft can be beached and the bow is de- signed to enable the chase to extend beyond the water margins.

Constructed from all-welded alu- minum alloy this 5.5-ton craft is reported to be able to inflict severe damage to any offending craft fail- ing to stop on command.

Resilient rotationally-molded fendering is fitted to the hull except on the bow where hard rubber is employed.

Propulsion is by twin sprint rated

Closed-cell infill between the watertight bulkhead allows the craft to sustain substantial damage with- out swamping.

The craft is available from 32.2 feet to 49.2 feet with optional wheel and deck houses. Armament and protection are designed to fit the end-user's specific requirements.

Robin H. Booth has been named marketing manager for Avondale

Mr. Booth joins Avondale with a

Prior to joining Avondale, Mr.

Ga., where he was employed for the past 11 years. He has also held various engineering and marketing positions for Bird Johnson Co.,

Government, which has agreed to take an 8.5 percent investment stake in the field. Also joining the list of

The Hibernian oil field was dis- covered in 1979 and is reported to contain an estimated 525 million barrels of oil, which is intended for sale to U.S. East Coast refineries.

It became necessary to redistrib- ute shares in Hibernia after the with- drawal of Gulf Canada Resources in 1992 and its 25 percent holding.

Resources agreed to raise its share by five percent to 26.88 percent, and

Critics of the project have ques- tioned the viability of the field based on the estimated $15 to $30 cost per barrel of oil recovery.

According to the Canadian Gov- ernment, a further $4.06 billion must be invested over the next six years to bring Hibernia into production, with an additional $2.6 billion to be spent on capital costs during the produc- tion phase.

Vessels returning to Chile from the Port of Philadelphia are being loaded with new, heavy-duty corru- gated boxes designed to hold fruit, a new cargo for the port.

The Chilean vessel Northern Ex- plorer was recently loaded with 612 tons of the boxes, with a second shipment of 300 tons scheduled to leave later this month.

After the boxes arrive in Chile, they will primarily be used to ship the country's fruit export to Europe, although some boxes will return to the U.S. through Philadelphia or

Los Angeles with fruit from Chile.

The corrugated boxes are manu- factured by International Paper

Company, who reports a growing market for its product. The boxes are said to recycle better than wood boxes, they are not as easily dam- aged and graphics can be easily printed on them.

Leong Kang Chuen as its execu- tive director. Mr. Leong takes over from Mr. Wong Kok Seng, who is returning to Keppel Corporation,

Prior to this position, Mr. Leong was general manager of operations at Keppel Shipyard in Tuas. He has been in the marine industry for al- most 30 years, including 24 years with Keppel.

Mr. Leong was responsible for setting up Keppel's operations in

Jens Eybacher has taken over the management of sales marine applications within the Deutz MWM division of the KHD group.

Wolfgang Libbach, who will retire in mid-1993 after having been a member of the staff of Motoren-

After he retires, Mr. Libbach will uphold ties with the company in a consulting capacity.

The vessels are 33 feet in length, with an eight-foot beam and a draft of less than three feet. The hull is constructed of fiberglass.

The vessels will have twin diesel engine/jet drive power trains with a total propulsion package of 800 hp.

These high performance RIBs have a design speed of 40 knots.

A full deployment package, in- cluding spare parts and major equip- ment components, is to be delivered with the RIBs.

The contract schedule requires that the first two vessels must be delivered in October 1993, with two additional vessels each month.

R. Dunzelman to the position of operations manager.

The new position calls for Mr.

TNT's fleet of fast ferries. He is now charged with ensuring that TNT vessels comply with all manning and operational requirements as estab- lished by the U.S. Coast Guard. He will continue to assign and super- vise crew members for all vessel movements while overseeing main- tenance of vessels and shoreside fa- cilities. 101